Polop is a small town close to Benidorm and after having past it for lots of times I finally turned right and entered the old town. The full name is Polop de la Marina and the town has left its best days behind. It used to be the residence of the Barony of Polop and Benidorm under the Crown of Aragon. The territory included much more land, from Guadalest to the Algar Rio and Villajoyosa and the castle was the most important one in the area.

During the 14th century the town was ruled by the infantes of Aragon. Since then, it has passed by personal descent in the same family, which, in 1430, became the Fajardo de Mendoza family. In the 19th century the feudal system was abolished in Spain and Polop became less important. The lordships lost their power but kept their titles and land and up to today the Baron of Polop still belongs to the same family, the Fajardo de Mendoza family. 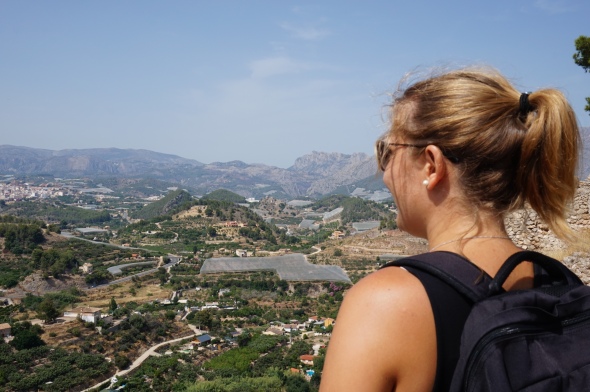 I didn’t know about the history of the town before we went there so it was a real surprise. The whole time we spent there, we met maybe five different people, probably tourists like us. But we went in the afternoon and everyone was at home enjoying the siesta. The town was really small, especially the old part so we decided to go uphill, towards the ruins of the castle, that was built originally by the Muslim during their reign over the Iberian Peninsula. The view was amazing and you can see the whole area. The mountains, La Nucia, lots of plantations and it was really breathtaking. Especially in the heat of the afternoon and the complete silence around us.

Next to the ruins is a small restaurant, that served some snacks for lunch and an old cemetery, that we also visited. The heat was burning and we saw some really old grave stones. The cemetery is not used anymore but it was a strange feeling visiting it all by ourselves. I think I have to come back to Polop later in the afternoon, when the streets become alive. This town felt so pretty but up to now I only saw the ancient buildings and not the current life.