Yes, I’ve decided to move to another country. Inside of Europe. With my boyfriend, that is a native and already has a job there. That knows the language, obviously. That has family living close by. To a touristic area where you can easily find Germans. Where the landlord puts all information in Spanish and English. On my first day here I met a German couple in the supermarket and once in a while I speak German on the street. Doesn’t feel so exotic, so different… but still, I’ve moved to another country. I’m an official resident by now!

We decided what was best for us. And while my boyfriend extended his stay in Germany for a year and another and another until he lasted 7, I always knew he’d want to move back. Go home. And now things seemed so easy. We found an apartment, bought a car, and I’m starting to feel more and more comfortable speaking Spanish and I have started working as well!

Maybe it hasn’t sunk in yet. Maybe I haven’t realized it. Maybe I’m still in vacation mood. But why not move to another country, another city and try something new? We will both grow and make new friends eventually. Establish a much sunnier life close to the sea.

But now I am the foreigner that doesn’t adapt completely. That keeps on talking in his own language at home, prefers German over Spanish, needs help with everything and wonders why they don’t have translators at official places (not even the office for foreigners…). I know what it feels like signing things you hardly understand but feeling ashamed to ask for help. The person that eats different food and looks obviously foreign in almost every group because I’m super blond by now. Like the foreigners I’ve commented on in Germany. How it would facilitate their lives if they spoke the language fluently. If they mingled and made German friends and if they spoke up every time they don’t understand everything. I guess that’s karma :).

I’m not saying I don’t want to adapt but I still need some time. I’m excited to see how Spanish I can be. Isn’t that fascinating? How your environment and culture can change you and you figure out what’s most important to you? What it means to be German and to keep your identity while you are changing in order to get settled with more than just your body!

In the last four weeks I have reached a decent tanning level, went to the beach around twice a week, a lot more times to the pool, got to know different towns around here, had my first interview in Spanish and started working. Let’s see what the next four weeks have to offer! 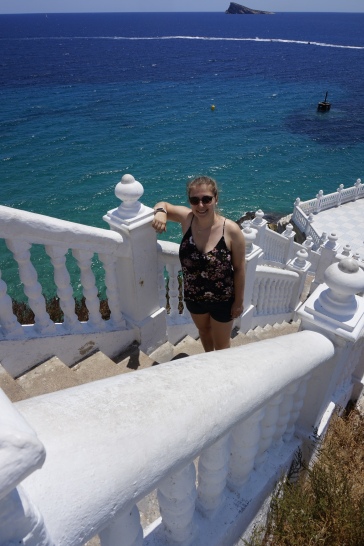